It starts in the pit of the stomach. Hours away from the start of the race, as I was staring at the ceiling, the seconds seemed to drag. I can never sleep before a race. I feel like I’m afraid of oversleeping and missing the race. The Flying Pig was slated to be my biggest race ever. About 12,000 people registered for the half marathon alone, with a total of around 37,000 people registered for all the weekend races. All those people, and a massive crowd to boot. The stage was set, and my nerves just wouldn’t settle. Today was the day when piggy me would fly. 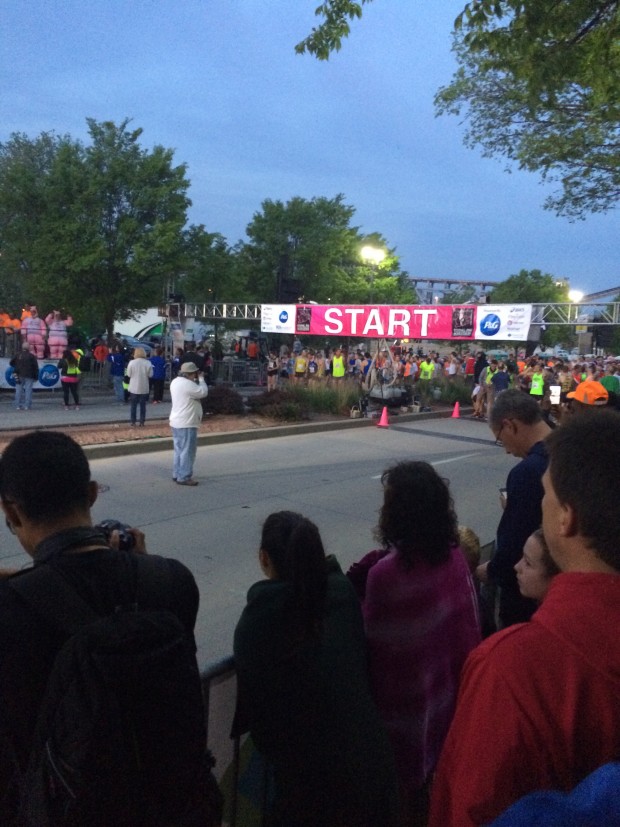 As twilight broke on downtown Cincinnati, I trotted my way towards the start line. The crowds were large. Pounding music thundered from the loudspeakers. I fumbled with setting up my bluetooth headphones and gps watch. Pyrotechnics galore and the race began. It was beautiful, catching glimpse of the sunrise over the river as we crossed the bridge to Kentucky. Then a feeling of dread rushed over me…

Just short of the 2-mile marker, my bladder started singing a song to me about how smart I was to be fully hydrated. The ode was sensational, and not in a good way. The dilemma, to stop or not to stop. Porta-potties coming up on the left. Should I stop? Should I stop? I knew if I did, I’d jeopardize my shot a a PR. While struggling to make the decision, the opportunity passed. After a few miles, the internal serenade stopped, and I was able to enjoy some of the most breathtaking sights. Cincinnati is such a beautiful city at sunrise. The glimmers of day illuminated the shadows and highlighted a thousand silhouettes before me.

In my ears thundered the chorus of Warriors by Imagine Dragons:

Here we are, don’t turn away now,
We’re the warriors that built this town…From dust.

Before me loomed the first of a cruel series of hills. I had set a speedy pace up to that point, but everything was about to change. Gritting my teeth and looking over my shoulder, I lowered my head and powered down for a sustained charge. One after another, the hills rose. I’d look to whoever was beside me and say, “We can take this one! Conquer the hill!” Did I sound like a nut? Probably, but it kept me going, and it kept the people near me smiling. When the worst of it was over, I sounded another cry: “Victory is ours!”

On we charged, down the other side of the hills at a blistering pace. The pounding on the pavement was almost as bad as the muscular strain on the way up. Time for a little fishing. I spotted a runner a bit ahead of me. Subway shirt. “Pass the subway,” I said to myself. Within a half mile, I’d done it. Next? I saw another runner. She had a little water bottle attached to her waist. “Pass the bottle,” I told myself. For 2 miles I kept trying, but she wouldn’t let up. Not ever a little. “Come on. You’re faster than her!” Whether or not I actually was, I really needed to tell myself that, because I seriously couldn’t catch her. With just a mile left, I found one last gear and kicked into it. 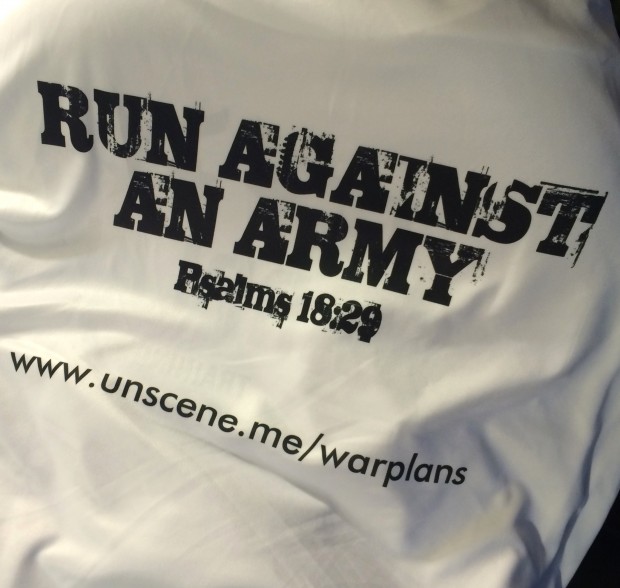 Ahead of me I saw a race clock coming up. When I got there, it was ticking past 1:43:00. I panicked. I wanted so badly to run a sub 1:45:00 half marathon, and with the finish line looming ahead, it looked like I wasn’t going to make it. “You didn’t come all this way to fail,” I said, starting a final push for the finish line. “It’s yours. Take it!” Ahead, I could hear the swelling chants of the crowd and the thuds of a hundred footfalls on the pavement. My legs said no, but my mind refused to yield, and I pushed into a sprint. One after another, I passed runners, weaving back and forth as my WARPLANS Training shirt fluttered in my wake. The shirt had been a big part of my preparation. The message on the back simple, yet profound. Psalms 18:29. “With You, I can run against an army.” And here it was, the final moment. Two hundred meters. Overtaking runners by the dozen, I heard a stranger’s voice shout out from the crowd, “Go WARPLANS!” It was like I had wings. I soared across the finish line.

I stopped to catch my breath. Did I make it? I checked my watch. Then I remembered, I’d started the race in the second wave of runners, and instead of being in danger of missing my coveted finish time, I’d beaten it. One hour, forty-three minutes. Exactly. The excitement was inexpressible. My legs felt like they were about to give way as I meandered through the crowd of finishers receiving their medals, mylar, and refreshments. Someone tapped me on the 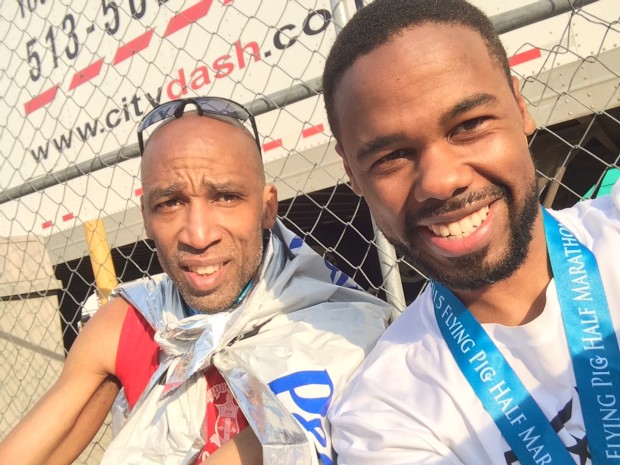 shoulder. “Man, you were so fast at the finish,” he said, congratulating me. I stopped to stretch and then took a seat on the ground, not feeling like moving at all. Another fellow runner, George, struck up a conversation with me, and we recounted the best and worst of our race. As we were sitting there against the fence talking, a random guy walked up to me and said, “Thank you. You really helped me make it up that hill.” Honestly, to me, that is what running is all about. Personal records are nice, finisher medals are cool, but the familial spirit that we share out there is what truly makes it a thing of beauty. It makes me realize that in those moments when I feel like giving up the most, maybe the best thing that I can do is try to encourage someone else. At the end of the day, maybe we’ll both make it. 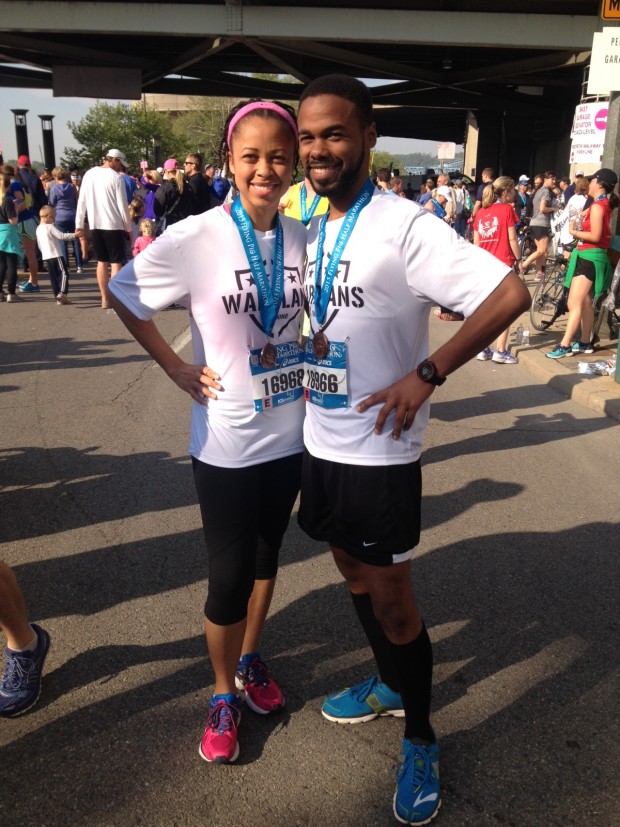 After a little more talking and resting, I found my parents and we then met up with my sister, who had just finished the race as well. She is truly an inspiration. She’s the one who first got me started running. I probably would have lost my mind otherwise, but thankfully I’m here. It was amazing to stand beside her and bask in the moment.

Flying officially completed, it was then time for the pigging. We all went off to eat breakfast and relish the sights and sounds. There is so much to take in, and while it’s really a couple of hours, it feels like no time at all once it’s over. I still think the best sign I saw by the side of the road was: “Don’t be a Seahawk. RUN!” I got online and we checked the race results. I placed 565th out of 11,526. I could hardly believe that my finish time put me in the top 5% for the race. Unbelievable.

We stayed at the restaurant, enjoying the delectable food until we were stuffed. It was such a great feeling inside. Feeling refreshed and invigorated, I made my way back downtown to catch the end of the marathon. I was so stiff and sore, but I am so glad I did. When I arrived, the race clock was ticking close to 7 hours. At the finish line, only a few dozen people lingered to cheer on the stragglers. What I saw, I will never forget as long as I live.

There is no glory. No one knows your name. Scarcely a soul is even there to see it. But these people give their everything to cross that line. Seven hours in the sun. Seven hours! Some had the energy to run across the finish line. Some walk. Some look like they might have to crawl. I watched as an older man staggered to the finish line. Twenty-six miles he’d come, and I wasn’t sure he would make it. His legs faltered beneath him. His body keeled over to the left side just to keep balance. His entire figure was askew. His gait, if you could call it that, was a feeble limp. He might not make it. Something inside of me welled up, and I started screaming cheers for him. The few people near the finish line joined in. His head never raised up. His eyes never left their steadfast gaze upon the pavement just in front of him. I’m not even sure he could hear us shout, but we could all feel his determination, and we cheered all the more.

In my head I can hear the rhythm pick up as my imagination queued the opening lines from “Till I Collapse” by Eminem.

One step at a time, he drew ever nearer to the finish line, until he had finally made it. Medical staff wheeled him away in a wheelchair as we all breathed a sigh of relief. It got me thinking about just how invested he was in finishing. For me, finishing the half marathon wasn’t a huge challenge. I knew I could finish it before it started, and when I did, I could have easily continued on for miles more. I was sore and tired, but I was nowhere near a breaking point. But this man…this man showed the true heart of a champion. He left it all on the road, and when there was nothing left in the tank, no strength left in his legs, he willed himself across the finish line.

It was an extremely emotional sight to watch, even for me. Close to a half hour later one other person caught my eye. She was a middle aged woman, and she looked so tired. No bounce was left in her step, no strength in the stride. Just that same will power I’d seen in so many of these last few finishers. As she came within the last 100 meters, just as she was alongside me, I saw her take a deep breath, and as a single tear slowly rolled down her cheek, she raised her face to the sky a silently mouthed the words, “Thank you.” It was a moment I’ll never forget. For most of my life, I’ve been most inspired by the winners of the race, setting records, finishing in fabulous form. But now? Now it’s different. Right now the ones who inspire me most are not the first to cross the finish line, but the last.

They are my heroes.

This site uses Akismet to reduce spam. Learn how your comment data is processed.